Living in View of Easter 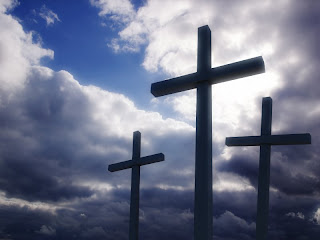 We are now in Passion Week and as the week progresses we are confronted with the terror and joy that this week brings. For Christ became sin, although he did not have any sin, so that those who trust in Him will be righteous before God (see 2 Cor. 5:21). Through the passion narrative we experience great love and community, betrayal, shame, distress, hatred, violence, death, but in the end, we experience victory. This victory is not a small victory, rather, it is momentous in the grand scheme of creation.

God, after bearing with a rebellious creation for a long time, has sent His Son to become a sacrifice in our stead. While movies like the Passion of the Christ make much of the crucifixion, it lacks in conveying the significance of the resurrection. Without the resurrection a good man would have been put to death, and perhaps some could even argue that a sacrifice was made. However, without the resurrection, sin and death would still reign victorious.

Jesus took upon Himself the wrath of God, which we deserve, becoming the perfect sacrifice. Through His death, payment for sin was made and God’s wrath was appeased. By His resurrection, Jesus became victorious over sin and death. This is our hope as followers of Christ! No longer does sin reign over us, and no longer is death the end! Rather, we now have an eternal hope in Jesus Christ!

Let us use this Easter season to remember that we have died to sin, and therefore are not longer obligated to its reign in our lives (see Romans 6-8). Our hope is no longer based on our performance, rather in Jesus Christ alone.

May God bless you and yours during this Easter season!