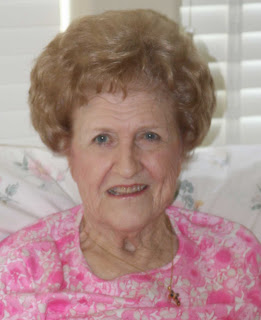 These past few weeks have been horrificly beautiful. My grandmother, Lois McAllister Roch, passed away early Sunday, November 26th. She was 81 years old and she was our Mema.

Steph, Braelyn and I went to visit her at her new apartment on November 10th. We had an awesome time with her and she absolutely loved Braelyn. However, while we were visiting her we knew that she wasn’t feeling well as she was on an oxygen machine to help her breathe. She was diagnosed in 2001 with kidney cancer and had her kidney removed at that time. Following the surgery she began various treatments until 2003 when she decided that she didn’t like the way the treatments were making her feel and since there was not a noticable difference she stopped receiving treatments.
The doctor had also told us that the type of cancer she had could stay dormant for some time, but when it began to spread, it would be quick. And it was.

On November 11th she was admitted into the hospital where her condition continued to worsen. She always had a great sense of humor and she and I were close, so we had some great conversations and some funny times. One time, I went into her hospital room and she was talking about ‘going home.’ Being a minister, I thought perhaps she was speaking metaphorically of her being ready to be with Jesus. So I asked her, “Mema, are you ready to go home?” and she looked at me with these big eyes and said, “Will you take me!?!?!” Apparently she was willing to take the chance of me being incarcerated so that she could go home. 🙂

Her condition continued to worsen and she was quickly tiring of being in the hospital having nurses poke her with their needles, so my mother and aunt decided to contact Houston Hospice when they were informed that my grandmother was terminal. This occurred on Wednesday morning, November 22. While my mom and aunt were meeting with the nurse from Houston Hospice my Mema and I had a great conversation. We talked about Jesus, we talked about family, and she shared her desire for her girls to be okay and for all of us to stick together as a family. I ensured her that we would and that we love her, but it is okay for her to go when the time came. We prayed together, laughed together, and enjoyed our time.

Wednesday evening we were able to transport her to my parents house. My mom, dad, and aunt were amazing at making things happen so that Mema wasn’t alone for Thanksgiving and could be surrounded by family for the rest of her life. On Thanksgiving evening my grandmother really began to struggle breathing, so she called us all in to her room and told us how much she loved us, how proud of us she is, and that she desires that we stay together. We expressed our love to her and stayed with her as she slipped to sleep.

The next few days she only woke a few times and by Saturday she was really struggling to breathe. At 12:32 am her heart stopped and she went to be with Jesus. The nurses with Houston Hospice were amazing and my grandmother did not feel any pain.

For the following days we spent mourning (when we had time!) and preparing for the funeral. Tuesday night was the visitation and on Wednesday I performed the funeral service, which was tough, but amazing at the same time.
My family and I thank all of you who have extended your love. We are doing okay and God has been extremely merciful and gracious throughout this time. I’m sure I’ll have more to write soon…